We’re back for another Artist Spotlight. Today, we’re featuring Graphic Designer, Pattern Creative Extraordinaire, Nadia Hassan. Nadia specializes in designing beautiful prints and patterns for fabric, and also has the most amazing eye for color.

Nadia designed an exclusive, signed and limited print collection for Vivid, and people are loving it! 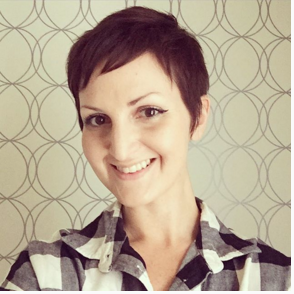 Vivid:   What is your art background?

NH:  I have a fine arts degree in Design from The University of North Carolina at Greensboro (UNCG), but like many people, I’ve been drawing, painting, collaging and crafting since I was old enough to use crayons and scissors. Until recently, I worked full-time for UNCG as a web and graphic designer, saving the artsy pursuits for nights and weekends. Before I knew it (translation: after about six years), I had built a second career alongside my 9-5 job, in June of 2015, I made the scary-but-exhilarating decision to pursue art-making full-time.

Vivid:  What materials do you use?

NH:  I work digitally with adobe Illustrator to create finished artwork, but I scan in a lot of drawings and hand-made textures to give my work more depth. Lately I’ve been working a bit with watercolor; its unpredictable nature inspires me to embrace imperfections, improvisation, and spontaneity, which I’ve noticed are qualities that I tend to resist (I blame my formal design background for that).

Vivid:  Where do you find your inspiration?

NH:  Everywhere! I am often inspired by everyday objects – looking at something familiar in a new way. Color plays a big role in my work, and is often the primary point of inspiration. I collect color palettes by taking pictures of interesting colors found while out and about, especially in urban areas.

Vivid: Where is the craziest place that you’ve found inspiration?

Vivid:  Who are some of your favorite artists?

NH:  Ha, does chaos count as a process? I’ve noticed that I have two distinct working styles depending on the nature of the project. Client work, which usually involves a brief of some sort, tends to be structured, researched, and well-planned; personal work is usually more intuitive and spontaneous – I often don’t have a particular outcome in mind until I’ve played around a bit and inspiration strikes. I enjoy both approaches, as each one taps into different skills and abilities, and satisfies different creative needs.

Vivid:  Can you describe a typical day?

NH:  Variety seems to be the theme in my schedule lately – no two days are the same. The one consistent element (besides coffee) is that I’m a night owl, so I prefer to work from afternoon until the wee hours of the morning. The first part of the day usually involves responding to emails, social media upkeep, a quick workout, maybe a household chore or two, sketching ideas and studying my inspiration boards (which are all analog, despite my otherwise very digital life). After lunch, I’ll dig into whichever projects require my attention for the day, and before I know it, it’s time to go to bed.

Vivid: What musicians do you listen to?

Vivid: How do you take your coffee, strong and black or sweet and creamy?

NH:  I love mimosas with brunch.

Vivid: Do you have a favorite piece that you’ve created, and if so, what was it and why?

NH:  My favorite piece is still the street painting I did on February One Place in downtown Greensboro, back in April 2013. Working on such a large scale was a totally new experience; when I agreed to do the project, I truly didn’t know if I could pull it off. Alone, I definitely couldn’t have, but thanks to some very talented and clever teammates, and many wonderful volunteers from the community, we made it happen! Witnessing such a positive, cooperative community effort first-hand has forever shifted my perspective – I couldn’t be prouder to call Greensboro my home.

NH:  Aquarius, and it couldn’t be more fitting.

Vivid: If you could invite anyone (living or dead) to dinner, who would it be?

NH:  Charles and Ray Eames (technically that’s two, but they come as a pair)

Vivid:  Tell us three words that describe you.

Those of you in the Greensboro area may recognize the colorful hexagons painted on Feb. 1st St., downtown; that’s the brainchild of Nadia.

And finally, drop by Vivid to see Nadia’s signed and limited prints.